This modest row-home in Bella Vista Philadelphia was purchased by our clients as a starter home after their first child was born. They had planned for a minor renovation of their kitchen which had been built below a cantilevered bathroom on the second floor. They knew that they would eventually renovate the bathroom addition because of some cracked tile and a tub that seemed to be sinking into the floor.

Building Failure: A Bathroom Collapse into a Kitchen Addition!

Originally built 140 years ago, our client's 3 story home was built along with other row-homes between a narrow street on the front and an even tighter service alley at the rear. With a central transverse stair which separated each floor into a front and back room, there were six separate small rooms. The original house was built with a 15 foot rear yard and a seven-foot cantilevered 2nd-floor addition overhanging the yard. During our exploration, we found a history of various kitchen sheds under the bathroom addition. You can actually see the worker standing on the abandoned, exterior concrete steps under the old kitchen floor! 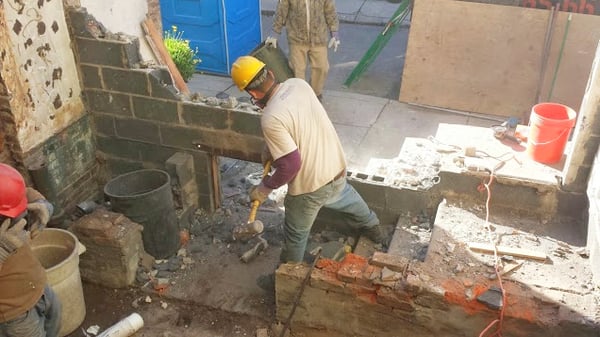 Designing a Three-Story Addition with Kitchen, 2 Bathrooms, Office and a Roof Deck

One simple option for our clients was to rebuild both of the kitchen and bath additions within the original existing spaces - but with less than 900 square feet of living space and their first toddler starting to get more active, our clients felt that this was the right time to design a larger addition that they could grow into. The challenge for our design team was how to work within tight space on each floor and provide the greatest value with the most features.  We worked through the design with our clients to develop a balance between getting lots of natural light (by selecting large glass doors and windows) but also providing the wall space that would be required for the kitchen and baths on each of the three floors. 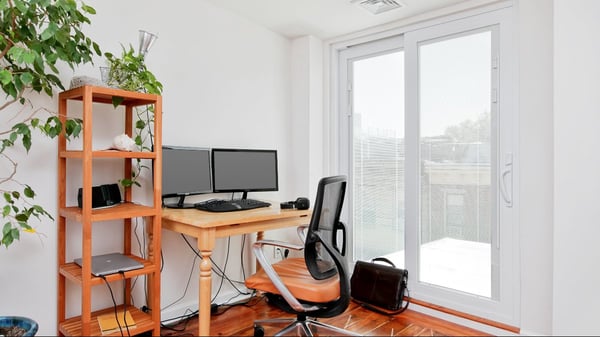 Our clients also wanted a home-office with lots of natural light. With this in mind, we were able to provide a lot of value on the third floor where we provided space for a full bathroom with a custom shower stall, a bright sunny office space with interior blinds on the patio doors, and as a bonus: a deck landing area outside of the patio doors that would someday lead to their main roof deck on top of the third floor.

Planning Around Mechanical Services for a Better Circulation Layout

In order to improve circulation and create connections between the kitchen and dining room, we designed a central mechanical column through the first and second floors to deliver venting, plumbing, HVAC ductwork, and electrical services. With the guidance of our engineer, we removed the entire rear masonry wall of the house and completed a structural re-build of each of the rear openings in preparation for the 3 story addition. 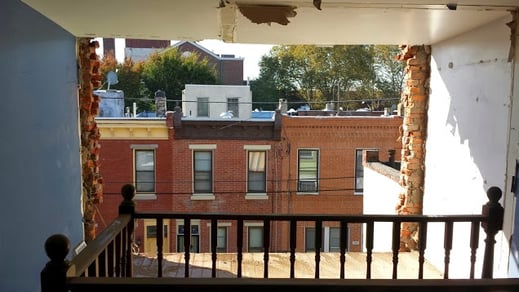 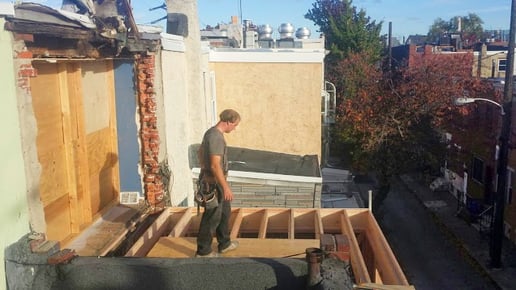 We developed a complete layout that our engineer could use for planning her structural openings in order to create connections from the house to the kitchen and bathrooms on each floor. We then excavated for new foundations and our mason poured new footings in preparation for the expanded structure of the new kitchen addition.

At the first floor kitchen, we installed a central peninsula connected to the mechanical column and designed a wall of shallow-depth glass-front cabinets and a full-lite glass patio door. The kitchen design felt open despite its limited space. The clients wanted the addition to transition smoothly with the rest of the home, so we were meticulous with the framing as we built upwards. 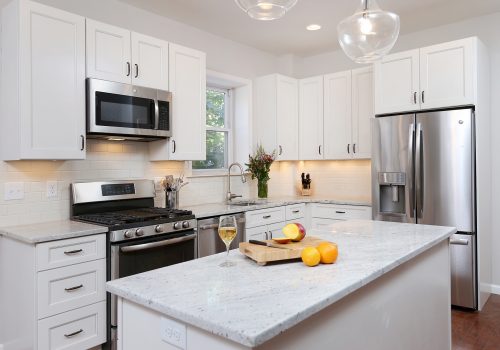 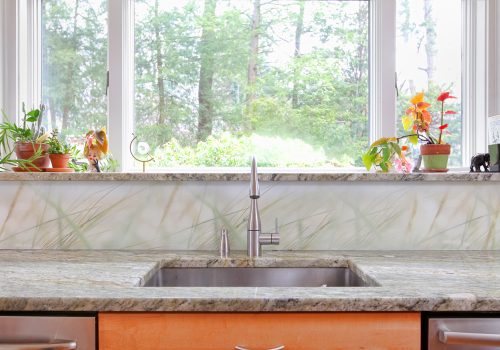 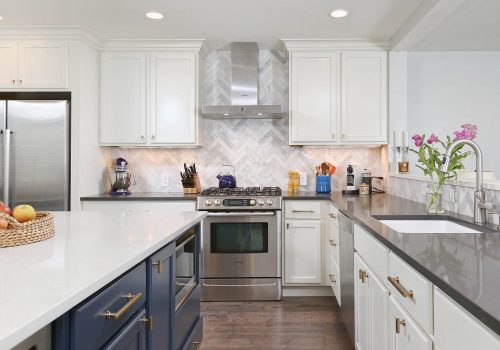 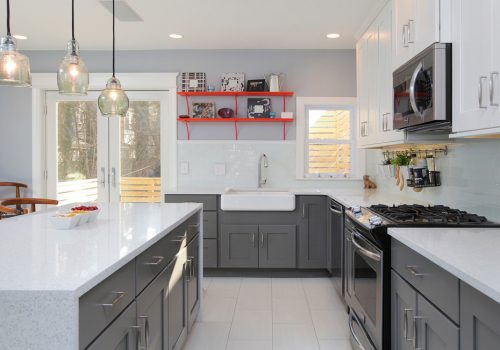 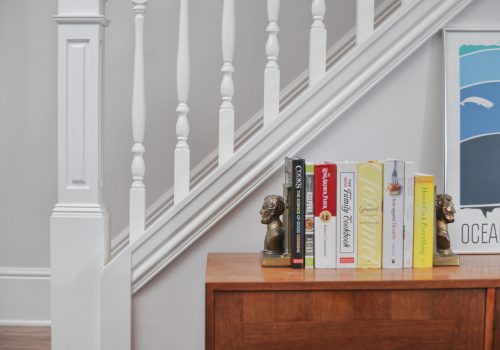 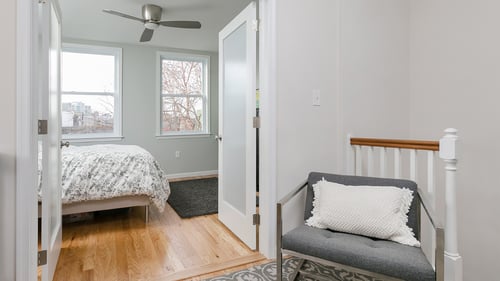 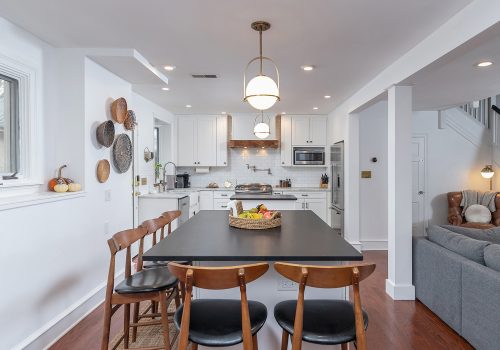 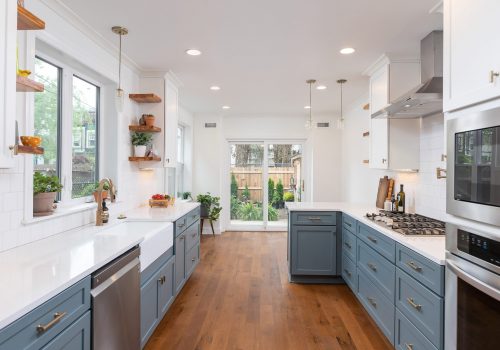 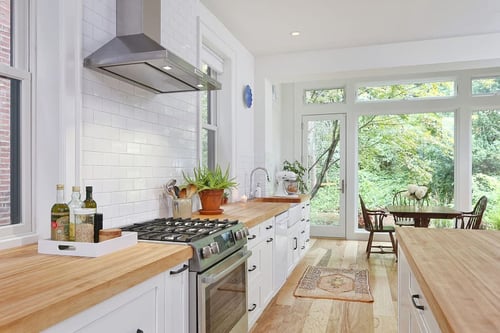 We're waiting to hear from you!